Look how cute these Splash Dipping Bowls are!

They remind me of shows I watched or books I read as a kid that had slow-motion splashes (or pictures of splashes) in 'em. 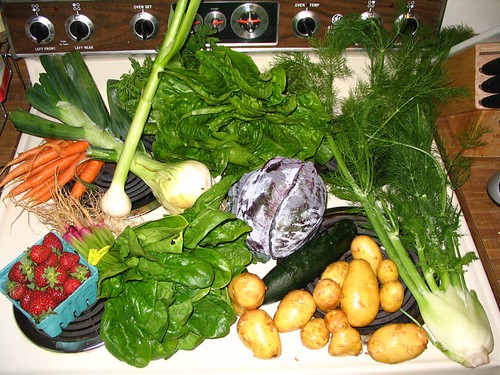 I'm not sure what I'm going to do with an entire head of cabbage. Someone at work mentioned German cabbage, my aunt suggested cole slaw. Hmm. And Cory doesn't like fennel but I might sneak it in somewhere. :)

I've biked to work twice this week! On the second Big Hill I wanted to quit, which I knew was silly because I've already done it several times just fine, and I got over it (literally AND figuratively!) OK in the end. I forget it I mentioned it before, but my work is a little higher in elevation than where I live, so on the way I've got a lot of slightly uphill stretches, and on the way home it's slightly downhill which makes for a faster and easier (mostly) ride.

This morning on the way to work I Fed-Ex-ed off the project I did for a new Interweave crochet book. Now I just need to do a little editing on the pattern and send it off on Friday.

This week is going by so fast!
Collapse