On Friday morning, we hit the road for Mom's house over in Redmond for our 4th of July weekend. We got there at lunchtime and were greeted by two aunts, an uncle, a grandma and Mom and her husband. Much talking was conducted, and dinner was eaten, and I spent a little time on the deck before bed watching teensy little fireworks way over in Bend. 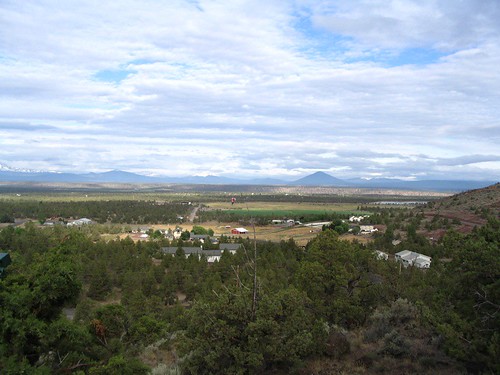 We watched a hot air balloon go by on Saturday morning, and then it landed in the field down below us. It's right in the center of the picture just beyond the red barn.

On Saturday after breakfast the other relatives left, and Cory and I goofed off in the newly-quiet house. Mom's husband took us on an adventure to Smith Rock, and then we went off-roading in the Explorer over Grey Butte before dinner. We watched part of Zoolander before bed.

Today we set off for home at about 10:30, and started over the mountains. Right before the junction of 20 (which goes to Corvallis) and 126 (which goes to Eugene) we suddenly decided to go up to Clear Lake and spend a little time communing with nature. We spent $10 on a rowboat and puttered around for an hour on the water.

When we got home, we opened the windows and checked email and such. I kept hearing what sounded like a parakeet outside the window, so I went outside to investigate. We have a big, dense bush outside our window (dense on the outside, but not in the inside, so it's kind of like a dome), and I peered in there and there was a white parakeet sitting in there! I enlisted Cory's help to distract it and after a few minutes I grabbed its wings. It bit me in the web between my thumb and forefinger pretty good, and held on until I could run inside the house and drop it, at which point Trout tried to pounce on it and it flew into the kitchen and landed on top of the cupboard. After I threw the cat in the bedroom, I took a picture of the bird since it was sitting nice and quietly up near the ceiling. 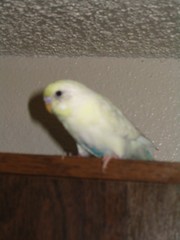 When I tried to get it to perch on the handle of a wooden spoon, it flew down into the corner of the floor and I threw a towel over it and put it in the salad spinner, with a straw stuck through the "bars" so it could perch. I made up a little flier and posted it at the mailboxes, on the door to the laundry room, and stuck one on the apartment manager's door in case anyone called her to ask about their missing bird. Within an hour, someone called - a woman was bird-sitting for a friend's daughter and as she was cleaning out the cage, her toddler son opened the front door and they flew outside and away. She went out to buy new ones, and then saw my flier. So I took it over to her and helped her get it out of the salad spinner and into the cage with its new siblings, and that was that! I'm glad it was a quick stint in bird-owning - I didn't want to have to figure out what to do with it and buy it stuff.

And in a few hours I'll have to go back to work. Oof.
Collapse