I am way behind. Whoops. ( Collapse )

Yesterday morning we went for a 7-mile walk. (We're training for the Champoeg 1/2-marathon walk on September 20th.) We retraced our bike ride out to the fairgrounds; our house through campus and on the Campus Way path past the covered bridge. We stopped just a few hundred yards from the fairgrounds, at the 3.5-mile mark, and then doubled back home. It was a really nice walk; there were no real hills but I don't think that Champoeg Park has any either. 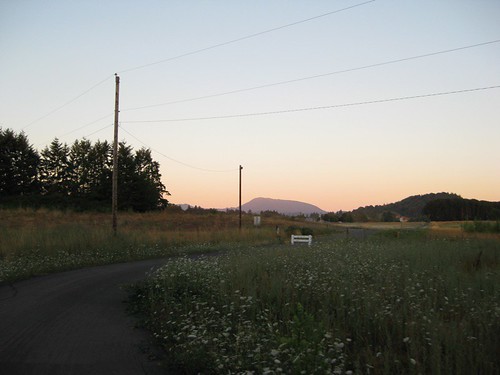 That's Marys Peak in the distance. It's an icon of this area, and a good place to hike in the summer with gorgeous views of Corvallis to the east and the ocean 21 miles to the west (I'd think you'd have to be lucky to see the ocean, though, as it's usually kind of hazy over there). You can see the queen anne's lace is out in force as well - in fact there are tons around the log pond here at work as well; I should go snip some and bring them in even though they drop petals all over after a couple of days. 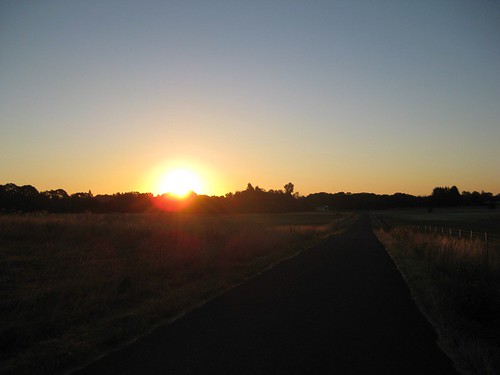 And there's the covered bridge and the sunrise. If you follow the path and right at the treeline veer left a little, you'll see the bridge - it's kind of hard to notice at first. It was built in the '20s, I believe, and relocated to its present spot from I-don't-know-where-but-it-was-probably-not-that-far-away. I like that it's off the beaten path and not drive-on-able - it's not a secret that it's there, but it feels like it is, nestled in the trees and out of view of any roads.

We got home at 7:20, about half an hour later than the time I usually start taking a shower and getting ready for work. In fact, I usually leave around 7:30 or a little later, so I had to rush around. This is why we planned on doing our long walks on the weekends - but we didn't get around to it last weekend so Monday morning (when it's still cool) had to do.

Then this morning we found ourselves out there again. Yesterday I read that the Pleiades meteor shower was peaking overnight, so Cory and I decided to get up at 4am and drive out to the soccer field or someplace to watch the sky for a bit. Only he didn't hear his alarm and we ended up getting up at quarter to five. He made some coffee and I waited for him out on the front walk for a few minutes, where I saw one little one in the eastern sky about 60 degrees up. Cory ended up needing to take some pictures of a couple of spots in town for a presentation he's doing for one of his classes, so we stopped at the lower campus park. I walked out into the field where it was a little darker, and tried to see more stars but the sky was already pretty light so I had no luck. As I was in the field I noticed sprinklers watering the grass waaaay down at the other end of the park, so when the sprinklers right next to me started sputtering I was ready, and I ran back to the car without getting wet.

So we abandoned our stargazing plans and drove out to the fairgrounds and parked, and walked the other way down the path for a ways so Cory could take a few more pictures. We ended up walking all the way to the covered bridge, where Cory took this: 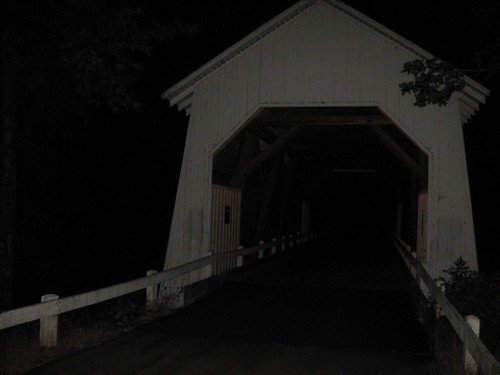 It looks spooky, but really it was light enough to see where we were going just fine, and there's a light mounted to the inside wall of the bridge right over the doorway there that you can't see because of the flash. So it really wasn't that dark.

I think the meteor shower should be continuing tonight, so we may try to do it again tomorrow morning.
Collapse