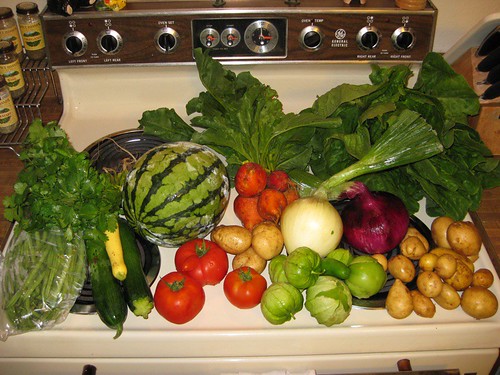 Before I even put anything away I chopped up the tomatoes, most of the tomatillos, half the jalapeño, half the yellow onion, and a handful of cilantro and made myself some pico de gallo. It's yummy now but I'm going to wait until tomorrow to eat it with chips because I want the flavors to smoosh together. The tomatillos are sour, so I didn't put any lemon juice in like I saw recipes for; and I don't like things too hot so I didn't use much of the jalapeño. I'll roast the beets, probably, and we need to do something with the potatoes soon as they're overflowing the bowl in the fridge.

We're having the yellow watermelon for dessert. It's pretty.
Collapse