Talk of the Nation today (for 40 minutes of the 2 hours, anyway) was about cars versus bicycles, and what's going on between them. Their first guest was an idiot who called bicyclists boorish Luddites, and their other two guests were more pro-bikes but really the entire program didn't have much substance. There were some good points raised, though nobody really seemed to get to the meat of why this is going on, or how to fix it (just that it will take a long long time).

I was all fired up about the subject afterwards, so I thought I'd put it out there for y'all. What do you think about the "war" between bikes and cars, and how do you think things should change?

I live in a very bike-friendly city, so I don't think there are as many problems here as other places, but I do think that drivers should learn to more freely share the road, but bicyclists should follow the rules a little more closely, to save their own necks. Today I was making a right turn and nearly ran into a biker who was on the wrong side of the road I was turning onto, just because he didn't want to wait for the left-turn light in the left-turn lane. I'm all for bikers yielding at stop signs if nobody's coming, but when there's a lot of traffic bikers need to be a little more careful. That's not to say that I think they should get off the road; I think if everybody followed the rules (and maybe took a class or two on sharing the road, no matter how they use the road) we might be able to live in harmony a little better. 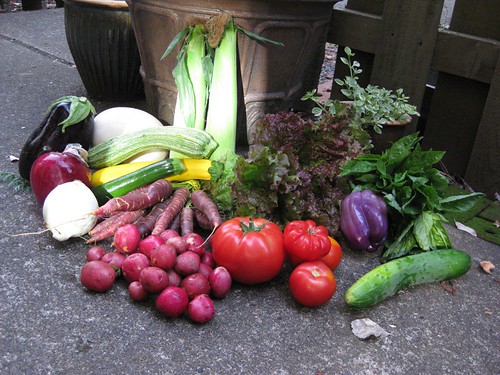 I'm really excited for the melon tonight. Yum. I've never had it before.

I've been cooking most of the veggies the same way for the past few months - we have salad with cucumber, and then roasting the others in the oven. It's yummy.
Collapse