So, a little while ago I turned on the dishwasher, and it was sounding kind of strange, like there was no water running through it. So I opened it up and poked around in there to see if I could see what was up, and noticed there was a straw down in the bottom so I grabbed it and touched the heating element at the bottom with the back of my middle finger.

I'm thinking it might be a second degree burn. It didn't hurt at first, and I ran it under cold water for 3 or 4 minutes and then laid down on the couch because I get squicked out when I look at even silly little injuries like this one. This looks different than any burn I've ever had though. It's white and I can tell it melted through the top layer of my skin 'cause there's a "dent" there now. It started hurting a little so I took an ibuprofen and now it's kind of a dull ache. I covered it right away so that I don't get it infected. And now all this typing is making it hurt more. So goodbye. 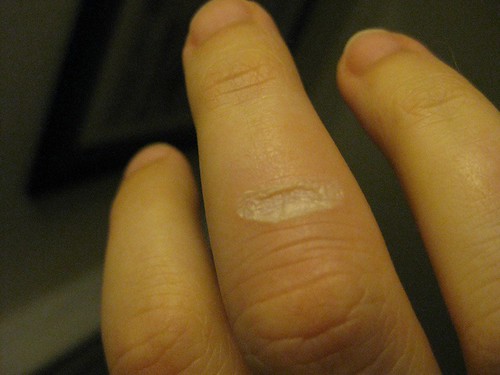