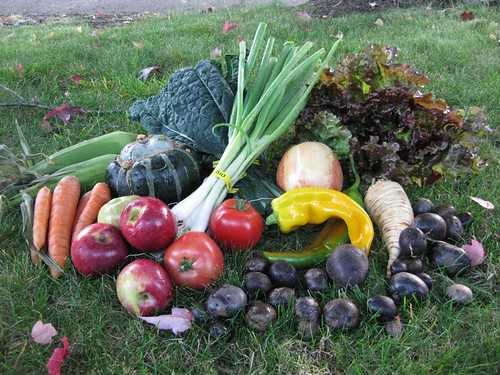 Last weekend we took advantage of the nice weather as well as the promise of a couple of free pumpkins and went down to our Community Sponsored Agriculture farm for an hour or two. Gathering Together Farm is just south of Philomath, which is just southwest of where we live. It's super close to downtown Philomath but still feels like you're out in the country somewhere. GTF has a very nice little stand and restaurant area which is out underneath a covered porch. We have yet to eat there and I believe their offered meals are winding down for the season, so maybe next year. 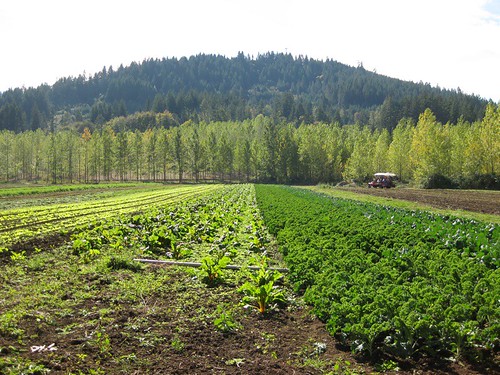 We had the option to take the hayride out to the patch, but we opted to walk down the dirt path instead. We met goats and chickens on our way, and peeked into greenhouses and saw tomatoes and peppers growing. The trees hadn't quite gotten to their peak in terms of color, but they were awfully pretty anyway, especially the large stand of birches at the alpaca farm across the street. 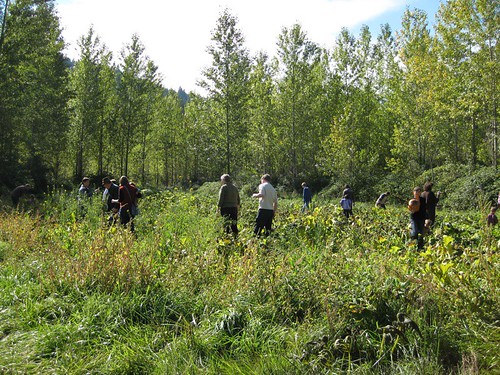 We left the stand for the patch at the same time that the hayride did, so by the time we got to the pumpkins the hayriders were in the midst of choosing their gourds. I loved the look of this little patch - it was like a tiny clearing in the trees, and looked almost wild. In some patches the farmhands clear away most of the vines and cut the pumpkins off so that all you have to do is pick it up and tote it home, but here they provided clippers to us and we walked on the huge leaves to keep from getting our shoes too muddy. We ended up using our keys to saw through the vines of our pumpkins. 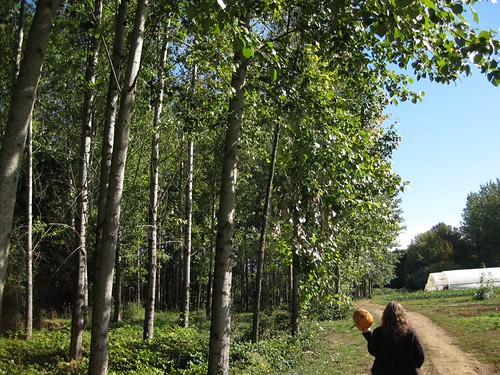 We walked back again, and said hello to the pigs in the pigpen by the stand. (In their newsletter two days later they said they slaughtered one of them a few hours after we were there - poor piggy!) Back up on the porch, we each had a glass of apple cider and a cinnamon-sugar potato doughnut, and then headed for home.

Cross-posted from The Granholms' Blog
Collapse