Tuesday: I finished all of my crochet projects, just in time! Phew! I spent a little while wrapping gifts: 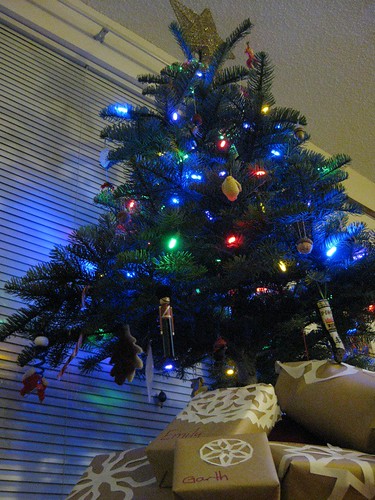 Wednesday: I got to leave work at around 10am, so I went home and finished wrapping my gifts, and wrapped up Cory's gifts as well: 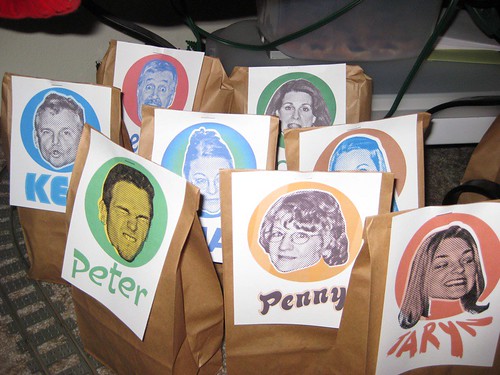 In the evening I printed out the local newspaper's list of good Christmas lights, and Cory and I set out on a tour. We wanted to capture the Pepsi Bottling Plant's hokey display in photo and in video. It started snowing and raining pretty hard, big fat wads of snowflakes in amongst the rain, so it was hard to keep the window open so that we could take good pictures but we tried our best. Then we started on the newspaper's list, and were pretty disappointed - one of the houses was gorgeous, but the rest of them were kind of eh, and it was hard to find a lot of them. I plotted them out on a Google map but I kind of wish I'd made directions to each one so we could make a loop. We gave up partway through, and then I watched the Yule Log on PBS for a few minutes before bed.

Thursday: We took a chance on Doaks Ferry Road in west Salem, and though it was pretty snowy on top of the hill we had decent traction and were fine when we took it slow on the way to my aunt's house. We got there at 10, and once most people arrived we started opening gifts. There were about 15 of us, and everybody got everybody else something (for the most part) this year, and our tradition is to go around in a circle from youngest to oldest and open our gifts one at a time. So it took around five hours, with a break for lunch in there. We also spent quite a bit of time on Grandma's gift, which was a rhebus and then a puzzle so she could figure out we're sending her to the Van Cliburn Piano Competition in May. We left my aunt's house around 6 and there was already black ice on the streets, but we were past the bad spots pretty quickly (it's been warm in Corvallis for a week now).

Friday: We puttered around, enjoying doing nothing. In the afternoon I whipped up a couple of gifts for our weekend hosts (Dad and Bonnie).

Saturday: Up to Portland. We got there around 10, and picked our way through the super-snowy parking lot of Cory's friend so we could have coffee. It was raining, so we got soaked on our way from the car to his apartment... and then we found that he wasn't home; he decided to meet us at Peet's down the street so we didn't have to drive in his parking lot and get high-centered on the ice. Whoops. So we had a bit of a challenge getting out of our parking spot, but we made it to Peet's and shared a french press and had good conversation.

Then we moved on to Dad's house, and had a little gift exchange and some lunch, and in the evening we went to Claim Jumper over by Clackamas Town Center (which has been remodeled since the last time I was there - I'd like to go in and wander around to see how different it is now. I remember when most of our malls were kind of dumpy but in the past couple of years they've added a ton of fancy expensive shops.) We had good food and got way too full. In the evening we noticed a lot of the snow had melted but there were still ruts in the side roads.

Sunday: We woke up to clear roads - it'd been pretty warm overnight and rained a lot, so most of the snow was gone. Cory slept in pretty late and Dad and Bonnie went to church so I had a quiet morning alone with the parrot. Then we had a pancake brunch cooked on Dad's new griddle at 1pm and by 2 we were on our way home so we could prepare for Cory's brother's arrival from the Bay Area.

Around Milwaukie on 205 we saw a sign that said there was a crash on I5 and to expect delays. And a few minutes after that, traffic came to a standstill. When we passed under the sign that told us the freeway-split for I5 north and south was in a mile, I made note of the sign - and 25 minutes later we hit the split. We entertained ourselves by going to tripcheck.org and finding the traffic cam for the I5/205 junction, and refreshing it every minute or two to see if we could see ourselves. And we could! Except as we tried to take a picture of my iPhone with Cory's iPhone, the dang thing refreshed itself and we lost it forever. Heh.

All in all, what should have taken us an hour and a half took us almost four hours. And three of those hours were taking the 1-hour trip to Salem. Halfway between Portland and Salem at about 2:45 that morning a tanker truck carrying 10,000 gallons of unleaded drifted off the highway, hit an ice berm from the plowing that was done a few days ago, slid 70 feet and rolled, and then exploded. ODOT decided to let it burn itself out, so they rerouted traffic for several hours while that happened, and then opened the left two lanes later on. By the time we got there they'd opened the last lane, but traffic was still horrendous. When we passed by the scene, all that was left were some wheels and axles being secured onto a flatbed truck. The driver died in the explosion. How horribly sad.

So we got home around 6, and I packed up all the Christmas decorations and moved the couch back where it belongs and set up the spare room for Joel. When he arrived we chatted for a little while and then took him to see the Pepsi lights, and then I went to bed pretty quickly after that.

And here I am at work, eating some lefse and looking out the window on the pouring rain and listening to the wind howl. We've gotten a couple of really nice gusts this morning. Hopefully the day will go by quickly so I can get home and play with my boys.

I hope you all got everything you wanted this year, and had a relatively stress-free holiday. And happy New Year!

In other news (har har), last night I was "flipping through" our local newspaper the Gazette Times online, and found this gem:

I'm so glad the Portland resident didn't get away before the local media put her in her rightful place, in the spotlight. That was a close one.
Collapse