A couple of weeks ago I was having coffee with my very pregnant friend Erin, and she invited me to come see her give birth to her second son Oliver! I was really excited - I've seen lots of YouTube videos of births (I started a Natural Birth YouTube group) but hadn't had a chance to see it in person. So as her due date got closer (he was due April 3rd) I started bringing my phone to bed with me so I could get going as soon as I got the call.

Yesterday I chatted with Erin on MSN Messenger a few times, and she told me she had lost her mucus plug and was starting to get sporadic contractions. At around 2 she told me it was difficult to wrangle her toddler while she was in labor, but when I asked if she wanted me there to help she said no.

So I made a dumb decision and thought it'd be nice to walk to Fred Meyer to pick up salad fixings for dinner. It's a 30-40 minute easy walk. I took my phone and we set out, and got there, and gathered our groceries, and as soon as we hit the checkout (at 4:40) my phone vibrated at me.

We flew through the self-checkout and walked home as fast as we could. I ran the last block or two, got inside and changed out of my now sweaty clothes, grabbed my bag and was out of there.

I had to call my aunt to have her help me with directions at the hospital, as the original plan was for me to go to Erin's house and ride with them. I made a wrong turn and had to make a U-turn and go back the other way, but when I got to the parking structure I found a spot pretty quickly and then made my way over to the birthing center. It was just before 6pm.

I got up to the labor and delivery area and stopped by the nurses' station and asked them to take me to Erin. The nurse knocked on the door and opened it, and I heard a baby crying - I was TOO LATE! By maybe a minute. The doctor hadn't even sewn her little tear up or anything. I rushed in and grabbed the camera out of my bag and went to see Oliver.

It turns out Erin was at 9 centimeters when she got to the hospital at 5:30, and after half an hour she was done! Her mom barely got there in time; she'd arrived seven minutes before he was born.

I stayed for almost three hours. I looked at the placenta (I said "it's kind of pretty, in a weird way" to the nurse, and she laughed and said "that's the first time I've heard anyone say that!") and got to hold Oliver for a few minutes (he sneezed, which startled him - so cute) and was there for his first feed, and was there when his big brother Anthony came to the hospital to meet him for the first time. When Erin's brother and his family got there, I decided it was time to get back home; before I left we planned for me to come hang out at her house on Thursday after her mom left, so that I could help out with Anthony and help Erin get some rest.

It was a whirlwind evening! I was so happy to be able to see at least the tail end of the birth, and Oliver seems to already be a pretty laid-back little guy! 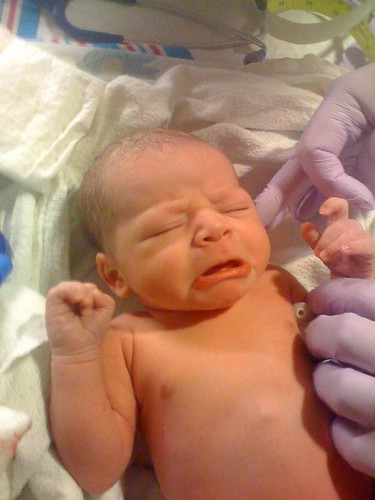 I put a few more pictures up at Flickr.

On my way home from work today I almost got rear-ended.

I stopped at a red light, about five cars back, and left a little space for a van to come out of a driveway to my right and turn left. I motioned for him to wait for a sec because there was oncoming traffic, and then I heard tires squealing and I looked in my mirror and a pickup truck towing a camper was coming up quickly. At the last second he swerved into a bush on the side of the road, just missed me by a foot, and when he hit the bush the nose of the truck was at the same level as me. So that would have been a hard hit if he hadn't moved over. I think it was probably a combination of wet road and heavy weight. And not-paying-attention on his part. It wasn't like I stopped quickly, I was a ways ahead of him when I stopped. Anyway, I decided not to wait for the van and moved out of the way before the truck had completely stopped. Sorry, van.
Collapse